The Failure of Low-Fat 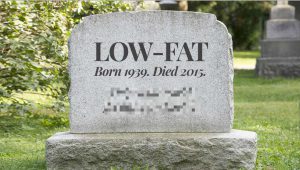 How a bunch of rich, fat politicians getting sick started a horrible dieting trend.   Low fat started out as a good idea back in the 70's and 80's to lower heart attacks (heart disease in general) which at the time seemed to be caused by eating a lot of fat.  A lot of attention was drawn to this by politicians increasingly dying from various heart diseases. The recommendations came from government healthy eating guides. The logic was simple the less fat people ate the healthier they will be. The food industry went nuts (but not using nuts of course, they have fat) creating whole new classes of products and variations on existing products that were fat-free, low fat and cholesterol free. So the mantra was less fat, more carbs.   Something interesting that happened at the same time was that people became fatter with obesity and diabetes starting to rise at an alarming rate. So the objective of healthier living through low fat actually had the opposite effect of increasing obesity which increases the risk of, wait for it, heart disease.

One part is what replaced fat within the diet - carbs. The recommendations said the increase in carbs should come from whole wheat, fruits and veg. That didn't happen, fat was replaced with sugar, refined white flour and starches (lots of corn starch amongst others). People tried whole wheat but the techniques for commercial baking at the time made them really dense and nowhere near as light as white bread. Whole wheat bread was usually 40 to 60% in whole wheat flour and extra sugar was added to get the flavour closer to people's taste for white bread. Another odd thing was how Canada regulates whole wheat. In Canada you can remove up to 5% of the wheat kernel and still call it whole wheat. What is usually removed is much of the germ and some of the bran - the whole wheat part (the only other part is the endosperm which makes white flour) so the label "Whole Wheat" in Canada is a joke. If you want 100% whole wheat in your diet in the ingredients look for "Whole Grain Whole Wheat Flour". The other is that at the time getting year round fresh fruit and veg was difficult and as now can be expensive. Most of the time is was canned veg which tasted really weird to say the least and canned fruit was usually packed in syrup which was more carbs which you already had tons of in your diet. Frozen veg was getting better due to technological advancements, but you could still thaw a veg that didn't keep its form and was a slimy mess. Thus for much of the year people's diets were supplemented with additional fruit and veg with a lot of added sugar and salt and in addition more processed grain was consumed. But this was considered okay because you reduced your fat.

At Least We Learned Something

With the benefit of hindsight we can now see how ineffective low fat diets were. In the 1960's fat was about 45% of the diet and dropped to 33% in the late 1990's, but obesity went up dramatically in that time period, so at a population level less fat in the diet had no effect on losing weight. For lowering weight more focused studies lasting more than one year found no link between less fat in the diet and weight loss. A long term 8 year study assigned women to a low fat diet or a control of them eating their usual meals. Women in the 2 groups did not lose nor gain weight any differently. Finally looking at the original objective of making people more healthy through a low fat diet, large scale long term studies found no link between the amount of fat and any important health outcome including cancer, heart disease and weight gain. So, cutting fat to make people healthy did not work.

So, can we break out the rib steak, bacon & eggs every day and smother everything with butter? Not quite, the general fat reduction didn't work but we did learn a great deal about fats and how they are necessary in our diets. What we found out was fats come in 3 general varieties - the ugly, the bad and the good and which you eat has a big effect on your health. To find out more on which fats are ugly, bad and good see our upcoming article 'Fats - The Ugly, The Bad and The Good'.

At Lakelands we take care of minimizing the ugly and bad fats and crank up the good fats in our meals to give you what you need and spoil you with great taste. We don't use added sugar and our red seal chef makes all your meals fresh so no processed meals at all. See our menus to see how you can eat healthy types and amounts of fat while enjoying great taste. Signup and try out what healthy meals can taste like when done right.
By LakelandsNutritiondiet delivery, dieting, food prep, food quality, meal preparation, portion control, weight loss1 Comment
Read more...